£0.00 Cart
Menu
Home – Blog – Effective Communication – DiSC – How to make sure your emails hit the spot!

We all know that emails have become a fundamental way in which we communicate. We’ve become even more reliant on them since Covid-19. The vast majority of us send and receive emails every day. But have you ever stopped to think how well you communicate by email?

Have you ever considered YOUR responses to the emails you receive?

The point was beautifully highlighted this week when I was training a team using Everything DiSC profiles.

During the training, a delegate called Robert with a very high ‘i’ behavioural style, said he was having major problems getting  his manager to engage with him about his idea to arrange an online mid-year conference.

Robert said that he was feeling increasingly frustrated by the amount of emails going backwards and forwards between them that just didn’t seem to be getting anywhere.

As we were discussing the importance of ‘flexing’ your style to the preferences, needs and priorities of the person on the receiving end of your communications, Robert had one of those wonderful ‘lighbulb’ moments.

‘ I’ve just realised I’m going about this in the completely wrong way!’ he exclaimed.  ‘My manager has a high ‘C style and I’m writing to him in my ‘i’ style. I’m getting all enthusiastic about my idea assuming that he understands where I’m coming from and I’m probably coming across as a loose cannon! I’m using the wrong tone, the wrong words and the wrong content and it’s a complete mismatch!’

‘So what do you think your ‘C’ style manager needs’ I asked?’

Robert’s response was absolutely on the button!

‘I think he needs me to be more clear, logical and evidence based. He probably needs more detail than I would need. Whilst it’s annoying that he can’t see what’s obvious to me, I think I need to show him that I’ve considered the issue thoroughly and that there are sound logical arguments for my proposal. I’m realising that having a structured, more thought through approach is much more important to him than it is to me in making this decision’

Two days later I received a phone call from the very delighted Robert, celebrating the fact that, by flexing his style in his email, his manager had started to take his proposal seriously.

Learn more about our next DiSC certification training

So lets look at how YOU can use the DiSC model to make sure your emails hit the spot more often!

To illustrate, let’s imagine that you are a HR Director in a company sending an email to the Managing Director (Hilary). You wish to invite connection on a well-thought-out idea you’ve had about organising an additional (mid-year) staff conference next year in addition to the usual annual conference.

Let’s imagine what Hilary’s preferred behavioural style is (as described by the Everything DiSC model).

Below are 4 emails you could send depending on whether Hilary’s preferred style is ‘D’, ‘i’, ‘S’ or ‘C’. See if you can spot which email is designed for which style (answers given at the end).

Great to bump into you on Saturday at the charity bash! Wasn’t the music great and such a fun crowd!

Hilary, I’ve had an amazing idea that I just know you’re going to love and it’s going to make such a difference to everyone’s morale! I can’t wait to discuss it with you.

Can we have a coffee together Tuesday morning at 10 after the senior team meeting? I think both our diaries are free for an hour or if you can spare some time at 4ish today we can catch up then?

Or if you can spare some time at four today we can have a catch up then?

I know you’re busy so I’ll keep this brief.

I’ve been assessing a potential initiative that really seems to stack up in terms of providing that boost to staff performance you said you’re looking for.

I could see real potential for a solid increase in profitability if you give the go ahead and so I’d really like to run this past you to get your thoughts and opinion.

When would be the best time for you?

Dear Hilary, I’ve done a thorough cost-benefit analysis on a possible new initiative. As a result, I have put together an initial proposal, designed to meet all of your criteria for a solution to the staff performance issues you raised last week. I’ve produced an in-depth report that I’d love your expert opinion on. Can I send it over to you please so you can properly consider the details? Thank you. Regards (Your name)

I enjoyed our conversation at the charity ball at the weekend. It was so great to finally meet your family. They’re lovely!

Hilary, I have had an idea that is taking shape that could really help the staff to feel supported to make those adjustments that will begin to noticeably improve their performance.

I’d like to walk you through my proposal step by step so that we can both feel reassured that I’m thinking along the right lines. Can we have an initial meeting on Tuesday at 10am? I’ve checked that we’re both available at that time. Perhaps we can set aside a whole hour so that we’re not rushing things?

Thanks for your ongoing support.

So what do you think? Which email was designed for which DiSC style?

Let me know your own experiences and enjoy flexing your style in your emails! (Scroll down below to the end of this blog for the answers).

If you are a trainer and would like to add Everything DiSC to your trainer's toolbox, join us in our upcoming DiSC Certification Training session.
Learn more 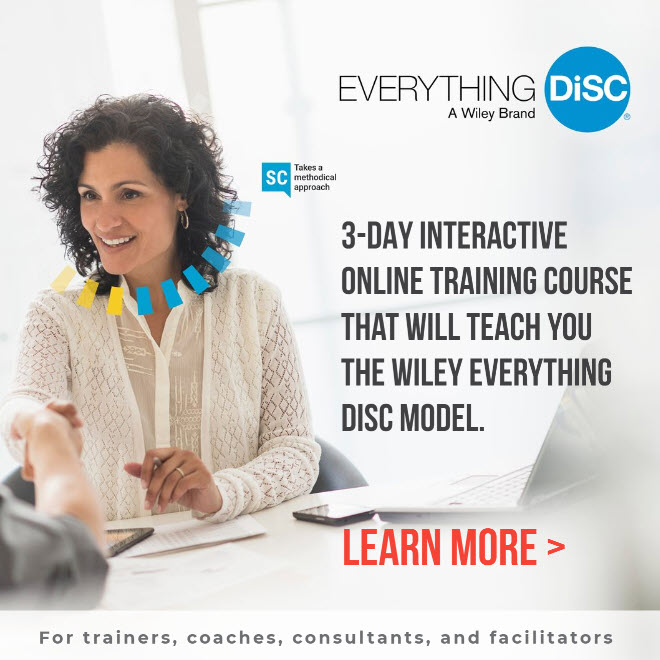 How do YOU feel about conflict? Are

One of the thorniest questions often circulating

Have you ever been in a situation

In this recording of a 'live' online

For many people, staring at a computer

We all know that online training has

We all know that emails have become

This is a question that we’re asked

What are some of the biggest challenges